Something I learnt from a flight into Tegucigalpa

Two weeks ago, I was preparing a flight to Tegucigalpa in Honduras. This airport appears in almost all lists of most dangerous airports of the world and I was planning to fly into the airport well prepared. I had flown into Toncontin International airport once before from Roatan. Weather was VFR with some scattered cloud ceilings, but there were chances of declining weather conditions. I was studying the approach maps in my Jeppesen subscription.

We filed an IFR flight plan, flew through a cloud layer out of the Guatemala valley and then all blue skies until we dove back into approach altitudes. Cleared for the VOR DME Rwy 02 approach, circle-to-land runway 02. The approach starts over the TNT VOR, outbound on the 108° Radial for 7 NMs, followed by a procedure turn and then back towards the VOR. We were under the scattered clouds on the outbound leg and I was able to spot the runway flying inbound. Then the tower announced “continue runway 02, report left base”. The engine was already at low power settings with temperatures stabilized. I flew with 10° of flaps, changed to 20° and requested straight in approach. Right over the hill then down… It worked out perfectly fine. But we were 100% VFR and I was able to fly lower than the Instrument Approach minimums would have allowed me.

After the flight I was wondering what the “normal” procedure would look like… Now with a different perspective I looked at the approach plate again. I have read quite a bit about circle-to-land and I have flown the VOR DME Rwy 20, circle-to-land runway 02 before. The Missed Approach Point (MAP) on VOR DME Rwy 02 is 1.7 NM from the runway. That is not uncommon, but what I didn’t notice before is that the MDA is 5,620 ft and the runway at 3,307 ft. At 110 knots it would need 2,494 feet / minute descent to make that. That is pretty steep and obviously not reasonable, especially in instrument conditions. The approach plate does not show any straight-in landing options, so in retrospect, I can see that it is not considered an option. On the other hand, I have never seen a circle-to-land procedure in the material, that was aligned with the runway, but too high to fly straight in. I have seen, opposite runway, side-step maneuver, runways at all kind of angles, but I have never read about circle to land to the same runway. Even now, when looking it took me a little time to find relevant information.

The best fit I could find was this article.

I found some comfort in the fact, that I am not the only one who has not seen this before. “[…] which leaves the pilot hanging to figure out what’s needed to get from MDA to landing. I believe the FAA should chart the descent gradient on such potentially dangerous and misleading procedures. […]”
The article also continues and shows the recommended way to fly the circle-to-land. Remember that you must have the runway in sight when arriving at your MAP or continuing towards the runway. The recommendation is to continue flying at your MDA towards the end of the runway, then start a descending turn with the runway in sight at all times. When you encounter IMC and lose the runway out of sight, you should execute your Missed Approach procedure. That raises another question, addressed later. 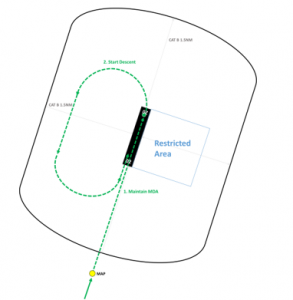 Now that sounds fair, but what if we put this proposal to the test with the numbers of Toncontin International Airport. As mentioned before, we have 2,313 ft to lose while executing the circle-to-land maneuver. Let’s assume that we use all available circle-to-land area, say 1.5 NM west, 2.0 NM south and 1.5 NM east and 1.0 NM North. These numbers are pretty high; it means that you fly right at the edge what you are supposed to do. The maneuver adds up to 5 NM and at 110 knots this equates to a descent rate of 850 feet per minute. More likely you will be doing pretty steep turns at around 1,000 ft per minute under a low ceiling in marginal conditions. Doesn’t sound like a good plan to me. What about adding 1.7 NM from the MAP to the runway, another 1 NM over the runway. Now we have 7.7 NM available, 550 feet / minute. That sounds better, but it also means that you will have to have the runway in sight at the MDA and don’t continue at MDA over the runway. This will be my new procedure for Toncontin.

What about the Missed Approach Procedure? At the MAP you just follow the Missed Approach Procedure description. “Climb outbound on TNT VOR R-008 to 6,500’ within 6.5 NM, then turn LEFT climbing to a minimum of 9,000’. Then return to TNT VOR.” Now let’s say that you have the runway in sight and continue over the runway. When getting ready to make the descending left turn, you enter a cloud and execute the missed approach procedure. Should you go straight to the 008 radial or make the left turn? Probably a judgment call. I would go straight out before the turn. If in the turn, I would make that turn a 360° and then head out on 008° radial. Once in the procedure, the recommendation is to turn towards the runway, you know that at MDA, you have clearance over the runway, so turn towards the runway and once aligned with the Instrument Approach continue with the Missed Approach. Again making the math… the turn back to the runway will have happen within 6.5 NM. Say 6 NM. Starting from the MAP, 12 NM out and back at 110 knots, you will need the minimum climb rate of 500’/minute and barley make it to 9,000’ over the VOR. As mentioned above at the end of the runway, right when you are planning to turn, you will have 2.7 NM less distance (1.7 MAP to runway plus 1 NM runway). Now you will have to climb at almost 700’/minute to get up to the minimum altitude. So depending on your aircraft performance you should make take different decisions at different points of the approach.

Here is an interesting question about the Missed Approach. Should you turn back to the VOR when reaching 6,500’? The MDA is at 5,620’, so you have climbed 1,000’. You will need to get up to 9,000’ or an additional 2,500’ when back over the VOR. Personally I would continue to say 7,200’ and then turn back, this should get me up there. Important is that I would have to make it to 7,200’ (or roughly half the altitude to gain) before reaching the distance limitation of 6.5 NM from the VOR.

Share your experience, knowledge or thoughts of this approach!!