Ever wondered when to expect less traffic?

Surely this has happened to you. You were very eager to fly, and when you taxi out a loooooong line of planes to get out of La Aurora fighting with the commercial airplanes getting in. This gets much worse when morning fog closes the airport. Then you can almost certainly expect long waiting times.

Its hard to predict human behavior like pilots like you and me. Surely Guatemala weather is usually more favorable in the mornings. But I did look at some hard data of commercial airlines. These are scheduled and I pulled the data for free from http://www.flightstats.com. A little bit of data manipulation and here it goes…

The left-hand side of the graph shows average arrival and departure times. Also the overall activity which is simply the sum of the two. Same information but this time for the week-end is on the right side.

For the early morning guys, based on this you need to get out before or at 6:00 in the morning. The first peak of mostly departures happens between 06:00 and 07:00. Throughout the week this stays more or less high until about noon then drops down a little. So afternoon flying throughout the week looks promising. There is a little peak about 7:00 but then the day winds down.

On week-ends, you can get out very early or wait since between 7:00 and 9:00 scheduled activity drops again. In turn you have the peak around lunch with both incoming and outgoing commercial aircrafts.

Ok. I will admit it, not the huge discovery, but interesting nonetheless.

A new article about a recent Alternator Failure has been added. Check it out and share you comments.

The Sunday of Semana Santa might be one of the busiest, maybe the busiest day of the year on the streets and in the air in Guatemala. It was so busy that it was hard to place a call on the radio. On my first flight coming into Guatemala City I circled outside the 10NM class C airspace at least 3 times before being able to establish 2-way communication with La Aurora Tower (118.10). La Aurora is a class C airspace and you cannot fly within the 10NM before the tower has repeated your call sign. I wish pilots would be more professional in these situations, stop complaining about waiting times, instead remember the correct phraseology and only say what is needed. This was a very challenging day for air traffic controllers and surely at limit of what the frequency can handle at times.
The second flight was even more interesting. Flying back into Guatemala City from Chiquimula, there was a lot of traffic from and to Rio Dulce. We established initial contact with Guatemala Radio (126.90), but Guatemala Radio must have some technical issues and they were not able to respond (or provide a transponder code). This created a lot of confusion on the frequency. We decided to deviate towards the south to be away from the Rio Dulce route. We also started to do Unicom type position reports, assuming Guatemala Radio and all other aircrafts would at least hear us.

Then someone on the frequency “instructed” to change to 121.50 until Guatemala Frequency radio would be fixed. We did that, but when did initial contact where asked if we had an emergency. Obviously this is the emergency frequency and should be used for that. Not sure where that suggestion came from at the first place. Very questionable…

We switched back to Guatemala Radio with no success. Then decided to enter the Guatemala airspace from the south east (runway 02 was the active). We tuned the transponder to 1200 in ALT mode, this is the North America standard VFR code and would allow them to see us on the radar, without knowing who exactly we were. We switched to Guatemala Tower frequency and tried to communicate with them but only at around 12NM we were able to establish 2-way contact. Everything from there on was normal and event-less.

I would love to hear the perspective from Guatemala ATC. What happened that day and what they would have recommended the pilots to do. Generally, on very busy days, what would ATC recommend?
The one thing we could have done differently, we could have tried to connect with La Aurora Control (the radar and IFR frequency). Any other suggestions?

There are many items on the checklists, that simply state “CHECK”. Some of these are probably pretty straight forward, but do we really know what we are looking for? Elevator trim was one of those that I didn’t really know what to look for other than the position when set to neutral or check for movement. A new article explains the basic workings of the elevator trim and what checks can be added to the preflight check.

Filing a Flight Plan with AIS

When flying out of Guatemala City, you have to file a flight plan. Usually I file my flight plans through the Aeroclub. I know that most of the pilots file through the Aeroclub or the Circulo Aereo. But what if you want to file a flight plan after office hours. Before my instrument rating that never has never occurred to me (night VFR flight in Guatemala is not possible and sunset is around 6:00 PM all year around). But last week I wanted to file a night flight with a fellow pilot friend and I called just after office hours and everyone was gone. I asked around and was told that I should be able to file my flight plan directly with AIS. So there we went at 8:30 PM to the DGAC in Guatemala, next to the terminals. Most pilots will know the building for the yearly license renewal. At first I wasn’t let through the entrance gate. This must be a very rare occasion for someone to actually file a flight plan with AIS at night. After calling AIS, they arranged for us to be let in. The flight plan filing was quick, the staff was friendly and everything went perfectly fine. All in all it took us around 15 minutes. There you have it… there is an alternative way of flying a file plan, even after the Aeroclub and the Circulo Aereo are closed.

Pictures from night flight over Guatemala

Check out the Guatemala Skies Picture Gallery for new pictures added from the last night flight over Guatemala City!

Video added to Gallery – Flight from Roatan to Tegucigalpa

A new video was added to the Guatemala Skies Video Gallery. This video was shot in January 2015. The flight was conducted under simulated instrument conditions (wearing foggles) with an CFII on-board. After an instrument takeoff from Roatan the flight is in and out of clouds to Tegucigalpa, Honduras. Jeppesen charts are shown along the way, including taxi diagram of Roatan, the Roatan SID and an approach plate for Toncontin International airport. The flight finishes in Toncontin airport with a circle-to-land approach. 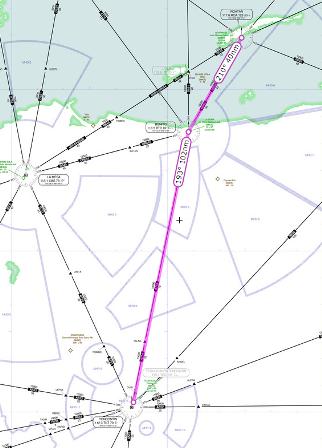 Click on the picture to see the route within SkyVector.

Hope you enjoy the video!

Click on the picture below and go check out Guatemala Skies Picture.

Let me know you comments!

A new article about IFR equipment

A new article was posted under the Articles tab. Check it out…