The trip to Quetzaltenango was long pending. Last time back on December we tried to land in Quetzaltenango the entire valley of Xela was filled with fog. This time around the METAR painted a more promising picture.

After takeoff from la Aurora and flying along the pattern under clouds, we flew a western heading into the blue opening. Clouds over the mountains between Guatemala and Antigua triggered a request to the La Aurora Tower for 10,500 feet inside the control zone and to fly two 360s to reach cruise altitude. At cruise altitude visibility proofed to be unlimited with Tajamulco at sight. The flight was smooth despite an up to 30kts tailwind. 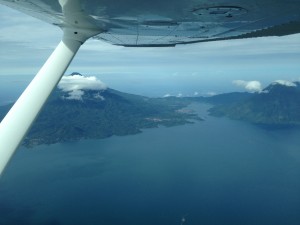 In Quetzaltenango we called in on 118.60 and 127.55 with no response on any of the two frequencies. While we descended into the valley we kept on calling and joined the left downwind leg for runway 23. While flying along the runway we did look down to the runway with no specific observations. We continued the approach and only on short final we noticed a multitude of people, dogs, bicycles, etc. The go-around was interesting. The Quetzaltenango runway is slightly uphill for runway 23 and is at an altitude of just under 8,000 Ft. The go-around is flown at a much lower angle of attack and the climb performance obviously is considerably decreased. Based on the METAR information the density altitude was around 9,000 Ft. No wind was reported, nevertheless at 500 Ft AGL a north wind in our backs could be noted which made the climb feel even less of climb. The optical effect of flying inside a valley (even if it is a pretty large valley) adds to feeling of not being able to climb out. The solution at the end is simple: Fly VX, shallow turns and some patience. Once turned in the wind, it felt better. Definitely an enriching experience in a controlled situation. Back to the “pasos y pedales” on the runway. We decided to go-around and not to land. The chance of a child chasing a ball, a dog crossing the runway or someone with headphones making an unexpected move seamed too high. There were two planes that headed for Quetzaltenango and as far as I can tell, they did land. Maybe the locals are used to planes coming in and will make enough space for landing. 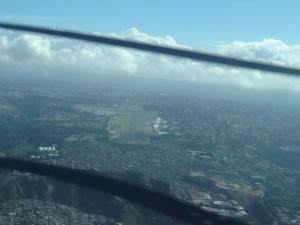 The flight back was beautiful on top of broken clouds most of the times. I heard Guatemala radio inform another pilot headed to Xela about the unofficial Unicom 123.00. Therefore I have updated the frequencies table. One more aspect to point out. … these days flying on top and coming into the La Aurora control zone high, is a useful option. It is no enough to talk to the Guatemala tower and advise about your current altitude, you have to request authorization explicitly if higher than 8,000 Ft.
Another interesting point for these days where flying high allows you to fly on top, when coming into the La Aurora control zone.

A couple of take-away´s and questions: