In preparation of a recent flight I found a bullet in my hangar. 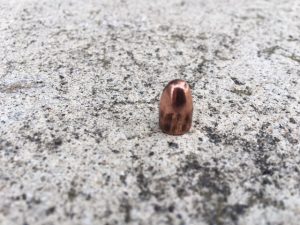 It was lying close to the open hangar door, so my first thought that it came in through below the door. Obviously I checked the aircraft extensively including the surfaces of the wings from above with a ladder, no impact was found anywhere, not even a scratch. A friend and I were searching for possible hangar entry points and found a small hole right above the aircraft. We also found a scratch in the floor suggesting roughly a 60° entry and could explain why the bullet would have ended towards the wall, under the door. We searched the entire hangar and this is the most plausible explanation so far.

If true, the bullet came through the hangar roof only slightly slowed down. It could have caused significant damage to the airplane. Damage on top of the aircraft can be hard to identify. How often do you climb on the ladder and have a good look from above?

I will include some checking of the hangar roof and the floor for objects into my checklist.