How serious are you about the checklist? 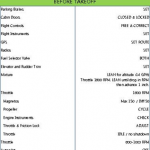 As much as possible, I try to write about Guatemala specific topics. But this article is not bound to Guatemala.

On a recent flight in the copilot seat, the magneto check showed a 300-400 RPM reduction on one side. We were in nowhere´s land, two flight hours away from home base and had commitments. This is why I like to fly with other pilots; it makes you analyze situations from a different angle. I have probably done the run-up checklist about a 100 times so far. It becomes a routine. How serious are you about the checklist? Are you ready to suck up the consequences of an item on the list fails? It appears easy to assure that you would? Really? Back into the Cessna somewhere in Texas, I realized my mind was going over the options. If the magnetos don’t get better after some cleanup work, we would taxi back, then what? Try to get a mechanic? On a Sunday? Drive into town? The guy helping with gas already told us that there were no taxis. Not even sure if we would have gotten public transportation or a hotel. Only one out of two magnetos is affected, right? What are the changes that the other magneto will have similar problems or fail? Wouldn’t it be much better to return the rental plane to its home base? Where have I heard that before? This sounds just like one of the “Never again” stories of the lucky ones that are still around to tell them. The less lucky stories are part of the NTSB accident reports. Doesn’t it almost always start with a not so critical appearing pilot error and then go from there?

So back then I made a note to myself. I promised myself to go through my checklist and decide what the consequences for failed items are. In another occasion I had spotted a recommendation for personal limits that I picked up. It’s fairly simple, write your personal limits (wind speed, direction, visibility, etc.) down and stick to them no matter what. You can only change them after a flight that didn´t meet the limits. Wouldn’t it be good to apply the same concept to the checklist? I will give it a try….

Oh and… we were able to fly back to home base. After running the engine up to 2,000 RPMs and leaning a max for some time, the magneto check came out perfectly fine. Check!

I would love to hear your opinion!